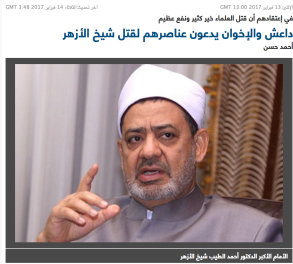 Below I have translated a February 13th article in Alaph newspaper titled “Daesh and the Muslim Brotherhood Call Upon Their Followers to Kill the Sheikh of Al-Azhar.”

It highlights the extent to which the political violence associated with Jihadist movements everywhere in the Muslim World is best understood using this paradigm:

The basic divides as relates to  Egypt in particular:

END_OF_DOCUMENT_TOKEN_TO_BE_REPLACED 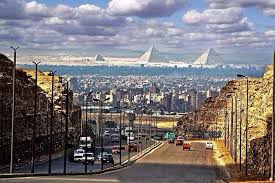 I have been studying Egyptian Ammeya for 6 months now, through 14 hours/week 1-1 classes. I’ve gotten to the level that I can have a conversation with a patient interlocutor about any subject. I watch Egyptian soap operas and while I miss a lot I can follow the story lines. My reading is pretty basic – I have been reading the dialogues in Taxi (as you recommended, thanks!). I read them with the help of my teachers, and we can now get through a page an hour. But I learn the words I know in terms of their Arabic spelling. I haven’t tried much writing.

My goals going forward are to get more conversational and also to learn to read. My priority for reading is around professional issues – I work on social issues for UN/NGOs. I would like to be able to follow the news and read newspaper articles and op-eds. While many papers/reports on my topics will be in English, I will need to be able to read, or get the gist of, official communications (like government notices, or inter-office communication). It would also be good to follow social media in Arabic. Later in life it would be good to read poetry or literature but this is not my priority.

So my question is on how to approach the study of Fusha. My teachers are saying that it will involve starting again from the beginning, and quite a bit of textbook work. They would also teach in a style where we would speak Fusha in classes. Given that I really dislike textbook work (preferring real material and dialogue), and am wondering whether I need to speak Fusha, my questions for you below.

Thanks for providing such a valuable resource for learners of Arabic, and helping to foster a community around it!

I am very happy to help and glad to hear you are taking advantage of what Cairo has to offer. All things considered I still consider Egypt the #1 place overall to study Arabic in the Middle East. Here are my answers to your questions, one by one:

(1) Do you recommend that I start “learning Fusha” now, or after strengthening my Ammeya further?

END_OF_DOCUMENT_TOKEN_TO_BE_REPLACED

Before 2011 Cairo was the undisputed top location to study Arabic in the Middle East. The last 5 years have been tough for Egypt and its schools that specialize in teaching Arabic to Americans and Europeans. Many US study abroad administrators and students are wondering what is the situation now, in 2016?

Let’s start with the Elephant in the Room – security. Yes it’s a serious issue that needs to be taken into consideration. However, it is also true that the media tends to dwell on negatives. This can make it hard for those outside of Cairo to know exactly what is going on. So let me just ask directly: is Egypt a safe place to study Arabic?

Even during the Revolution, despite the fact that we had a lot of action in the areas near our school, we never shut a single day. We’ve been working very hard with universities to revive business; it takes time.

Compared to Europe, these schools are finding Egypt a Safe haven.

Is this caution [about security] strictly from the US Embassy or is it American institutions in general? What about US universities that have sent students to Cairo to study Arabic in the past?

Yes, this seems to be American institutions in general.

Some of the [American] university professors are slightly conservative [about the risk issue]. Although this summer we have had lots of students from NYU, Texas, Georgetown.

However, at ILI we have always focused more on the European market, less so on the US market and so we’ve had more European students than Americans. Europe has been our core market. But we are going to the MESA conference in Boston this November.

Today in the US and Europe we have high schools and even elementary schools competing to offers languages like Chinese, Arabic etc. This wasn’t happening 15 or 20 years ago. Are you seeing that the Arabic language capabilities of students – at the time they come to ILI have improved compared to the past?

We are finding that Europeans at the point of placement when they come to us in Cairo – are at a higher level compared to US students, on average. If you look at US high schools, the focus is on Spanish, than Chinese.

Arabic is higher on the agenda in Europe. For example, there are more Arabic degree programs at European universities compared to the US.

Post-Revolution the Arabic level of Europeans has noticeably gone up. They have had to adapt. There is more and more interest in the higher level [government] positions that require Arabic, to focus in great detail on diplomatic , economic topics for example.

Such a surge in interest from European embassies has even forced us to adjust our placement system… we are now authorized to run the C2 diplomatic tests from ILI; most of the European diplomats are passing with flying colors.

Is it fair to say that the Europeans consider the learning of Arabic more important to successful diplomatic work than the Americans? Based on what you are seeing from your perch at ILI…

Absolutely. The European diplomats definitely take the learning of Arabic more seriously than their American counterparts. … John Casson, the British ambassador to Egypt, is practically a native speaker!

What are the goals for ILI during the next few years?

In 2017, our #1 goal is to ensure we get the Institute back to 100% occupancy. We want to return all of our customers and get back to 2010 levels. We are headed in that direction.

Post-2017, we want to expand to other areas of Cairo – places like Maadi, which are in a different part of the city than our main facility.

Building up our Teaching Arabic as a foreign language program is a huge priority. This is something we had done very well at in the past but got away from. Many European universities are looking for their teaching instructors to have more formal credentials in this regard. Our program is catering to both Egyptians and non-native Arabic speakers and it’s a major priority for us.

Another long-term goal is to expand into the international market. Scaling the market – but options are limited in the current Middle East situation.

That’s very interesting given the situation now in the broader Middle East. I don’t want you to give away your business strategy – but anything you want to share about particular ideas on location?

We are looking around at various places.

Jordan we are not a fan of. When the Arab Spring happened, many foreign universities decided to concentrate on Jordan as a study abroad location instead of Egypt. But the schools and the students were surprised at how expensive Jordan was comparatively. Many people thought the lifestyle there was less interesting than Cairo…they also found that the Arabic levels of the students coming out of these programs wasn’t as good as from Egypt.

It’s a tough market – in 2006 we set up a school in Syria.  We wanted to strategically position ourselves in Syria. We saw that as a very strategic market. But then there was the tragic assassination of the former Lebanese Prime Minister Rafiq Hariri. We left almost immediately after that happened given that the Syrians were accused.

We are exploring other locations and will continue to evaluate the market.

I am trying to choose the phrase that most accurately characterizes your outlook on the situation for ILI and Arabic study in general in Cairo based on what I have heard from you here. Am I right to say you are “cautiously optimistic?”

No. We are “very optimistic.” 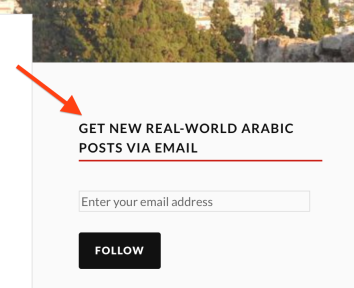 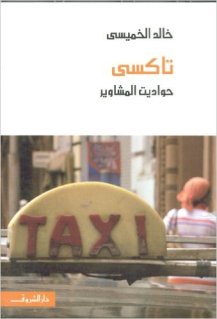 This is a book I strongly recommend for Arabic students, especially those trying to develop their speaking skills. From the original book cover:

The Good News for Arabic students:

END_OF_DOCUMENT_TOKEN_TO_BE_REPLACED 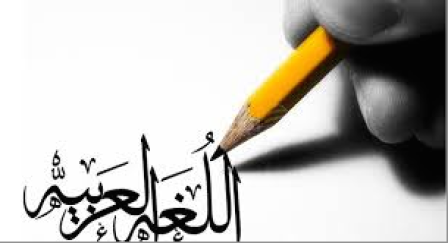 Read how to get a free review copy HERE