Back to blogging about Arabic – last few days have been a blur because of the election.

In the last few weeks I’ve been looking at written transcripts of spoken Arabic – from Algeria ( see here and here) and Morocco and trying to highlight practical takeaways for Arabic students, to make this whole process less intimidating than people often make it out to be. Here are 14 more takeaways. 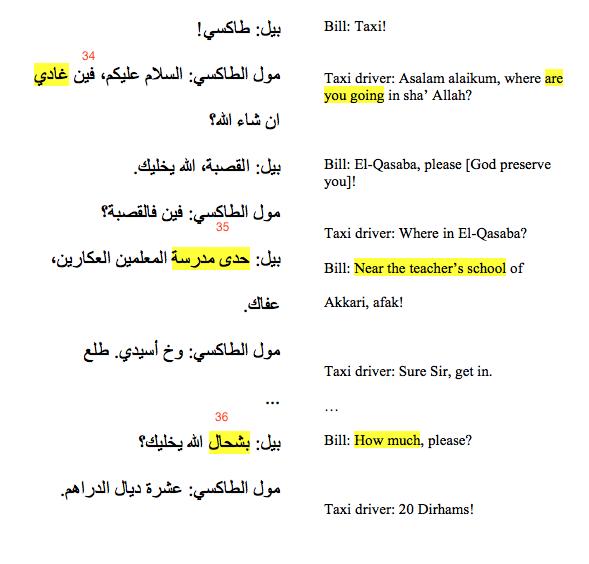 (34)   (غادي) in this future form. Like many terms I’ve written about in posts for this this series, Morocco was the first time I’ve seen it like this.  But it is pure Fusha and so this with a good MSA base should be able to make immediate connotations:

(35)  (حدى) to mean “near” something – hadn’t heard this before.  But looking at Hans Wehr it is completely consistent with the many definitions of this term. It seems that a thousand years ago, somebody started saying it this way…..

(36) Different way of saying “How Much”  as (بشحال  ) than anywhere in the central Middle East bit same exact structure and usage. Just a question of memorizing the vocab term for Morocco.  Or even if you said (  بكم) , you will still be understood.

Riding in a Train

(38)  See point 9 from an earlier post on Algeria. ( كاين )is pure Fusha.  I had never seen this used like this before, but if you have a good MSA base, you should immediately recognize the meaning.

(42)  A seat being occupied as ( عامرة).  One more verb usage I hadn’t heard before, but clearly a pure Fusha usage: 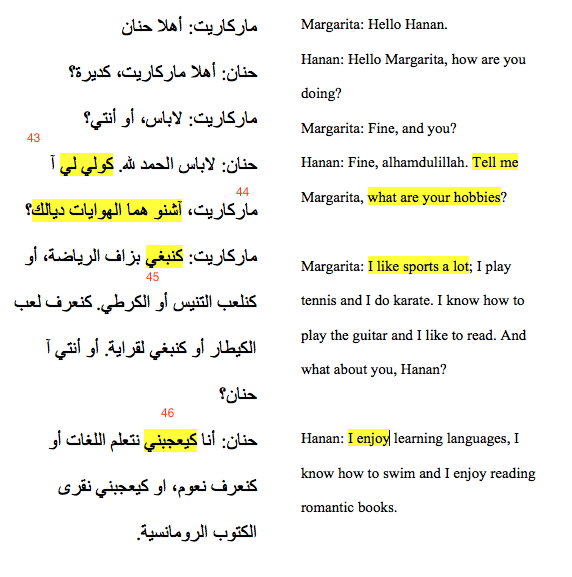 (47) (على طول  ) versus ( طول ). A minor technical difference in how this would be said in more central Middle Eastern countries such as Egypt.

(49) Starting to repeat myself,but nothing more than a mild technical difference in how this is said elsewhere.  Plug in any other regional variation of this term and you will still be clearly understood in Morocco.

Are you an Arabic student or teacher that found this post helpful?  If so, coming in January I will be publishing a book on strategies for developing spoken Arabic skills that will feature much more content like this.

One thought on “14 more takeaways on Moroccan Arabic”