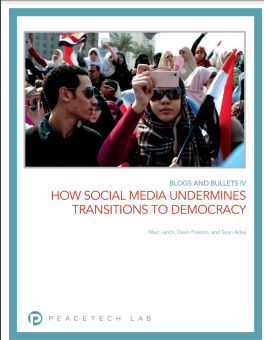 Marc Lynch and Deen Frelon of George Washington University have published an interesting report called Blogs and Bullets. They study how social media data was analyzed during the 2011 Egyptian Revolution and conclude that “social media undermines transitions to Democracy.”

In this post, I offer my take on the kinds of conclusions that can be drawn from analyzing social media data in this context.

But first, what I consider the two domains of social media analysis. This is something that the authors, along with many trying to study Twitter or social media, do not do. Yet it has important “Big Picture” policy ramifications.

The Tactical:   What does the data say in response to questions like how are the protests being organized, who is organizing the protests, what are the specific grievances of the people who show up at the protests  etc.

The Strategic:  To what extent does the data enable one to draw decisive answers to questions like “do the protestors represent public opinion at large? Or  “What position should the US take on Egypt?” aka “The Big Picture.”

My contention is that, at the time of the Arab Spring, specifically as relates to Egypt, journalists, think-tankers, the media in general, confused the two domains. They considered to be strategic, information that was purely tactical.

They also wildly misread the data that was available. This contributed to a climate where many of not most American commentators significantly misread the overall strategic Egyptian big-picture. 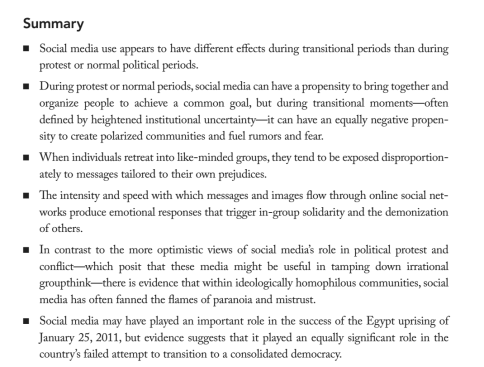 All of these conclusions seem logical to me. But they exclusively fall in the tactical d0main. Nothing of the above would have been useful to say, President Obama in 2011 in informing the US approach to Egypt.

This brings us to the first mistake made by those analyzing Social Media.

I agree completely with the authors on this point.

If you are Egyptian and you know English well enough to Tweet in English you are in the top 10% socio-economically.  You aren’t “representative” of 90% of the population.

Just to be clear, my critique here is not at all of those particular Egyptians. Far from it. The critique is with the journalists covering their Tweets, 99% of whom made no such distinctions. Instead of humbly saying something like:

“Here are the conclusions that we can draw from the very small portion of Egyptians who are Tweeting in English.”

The overwhelming majority of Western media at the time was happy to say this:

“here are what the Egyptians are saying.”

These are two completely different statements ( I should also add that the exact same pattern occurred during the media’s coverage of the 2009 Iranian Revolution).

If journalists had read Arabic Tweets as much as they read English tweets, they clearly would have have gotten a more nuanced assessment of the Strategic Big Picture and it would have been more pro-Mubarak, or at least less “all in with the protestors.”

They would have also been far more likely to understand that ultra-conservative Salafists were going to be the big winners in subsequent elections, not Liberals. Most were stunned when Islamists dominated the post-2011 elections.  As I wrote at the Arabist in December 2011, there shouldn’t have been any surprise.

And in the report, the authors provide future guidance on how people should approach this problem in the future: 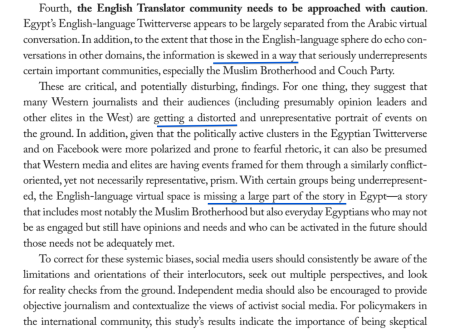 Although perhaps easier said than done.  The reality is that most of the journalists making bold statements about what Egypt’s English language Twittersphere meant at the time would have been unlikely to dispute that only a small portion of Egyptians could read and write English if you brought this point up.

Yet nobody really cared. Maybe it was subconscious and they didn’t even know they were doing it. Yet it is a simple fact that with only a few exceptions, virtually none of the 30 to 40 journalists I knew covering Egypt during this period, erred on the side of being humble or skeptical about the kinds of conclusions they could draw during the period of January and February 2011.

This brings me to the second mistake which I think is even more fundamental.

Why is this a mistake?

How can you generate a snapshot from social media of overall Egyptian public opinion towards Mubarak in January 2011 if at most 15% of Egyptians are even using it?

So this is my critique of the Lynch report – the fundamental, implicit assumption of “Blogs and Bullets” is that social media analysis is extremely important in conveying “what is going on. ” But how could anything we could derive from social media in 2o11 have provided strategic level guidance for US policy makers?

We had no idea where the overall public opinion stood.  Nobody wanted to admit this, but it was true. This is what I wrote on 7 February 2011 for WPR:

My contention is that this was ignored, because there was a conflation of what is purely tactical information, with unproven stragic domain assumptions about what that information meant.

There is some kind of human nature instinct that kicked in.  Maybe it was the intense academic and journalistic imperative to “say something.”  Saying “we don’t know” never gets Retweets or Likes.

If there was a more humble approach to what conclusions can be drawn from data, it is possible that President Obama may have taken a different approach towards Mubarak.

Things could have turned out differently than they did.

#1 – Analysts should be more Humble About what conclusions can be drawn
#2- It can be very strong in giving tactical assessments of the who, what, when and how, but will generally skew towards over representing the better off
#3 – As long as only tiny portions of the population are using it, conclusions about the Big Picture on “what is happening overall” can only be very limited and should be treated with extreme skepticism